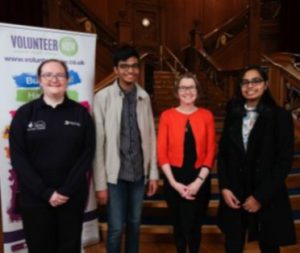 The Ring of Gullion Landscape Partnership was established after receiving a Heritage Lottery Award and the four-year funded project is now within its last year. As a result of the success of the project they are hoping to secure a five-year volunteering project to ensure its sustainability and impact.

The aim of the Partnership is to conserve and enhance some of the region’s most treasured
landscapes. Led by Newry, Mourne and Down District Council the Partnership engages with
the local communities in and around the Ring of Gullion Area of Outstanding Natural Beauty.

Slieve Gullion and its mystical ring dyke was formed over 60 million years ago with the opening of the North Atlantic Ocean! In more recent times the landscape has been shaped by the action of glaciers, leaving behind the stunning scenery that exists today.  Every nook and cranny has been exploited by wildlife over the millennia: Red Deer, Red Squirrels, Red Grouse, Irish Damselfly and the Irish Hare have all made their home amongst the peat, wood and wetlands. The Ring of Gullion has been inhabited by people for the last 12,000 years and those who have lived there have left their mark on the landscape; whether it is Neothlithic tombs, Iron Age fortifications, Christian monasteries, 16th and 17th century castles and much more. 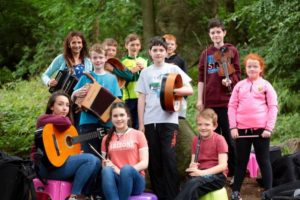 The Ring of Gullion is bursting at the seams with myths, legends and folklore.  The Partnership brings together a wide spectrum of expertise from geology, built heritage, biodiversity, tourism, agriculture, forestry and recreation, to everything that makes a community; its storytelling, music, dance and history.

Following extensive consultation, a number of key themes emerged. Principal among them are the conservation of built, natural and cultural heritage in the Ring of Gullion and increasing access and understanding of the area’s important heritage. Volunteers are key to the implementation of the Action Plan and their recruitment, support and recognition has been ongoing throughout its lifetime.

The majority of the Partnership volunteers are involved in conservation work; they are
primarily 30+ in age. A small group focuses on the Tree Nursery, collecting seeds and berries
and preparing them for planting in the Nursery; this is a weekly role and a constant and
committed group of volunteers are responsible for this opportunity.

About 100 volunteers a year have supported a range of outdoor conservation roles although
there is a constant group of 15 who attend regularly. Volunteers are 16+ unless they are
accompanied by adults and in this case, there have been a number of families who have
enjoyed opportunities particularly scrub clearances and litter picks. The main roles include
vegetation clearance and the trimming back of trees (positive destruction) in the winter
months and in the summer months: litter picks, path maintenance, repairing the Slieve
Gullion summit passage cairn and other varied roles in order to meet the needs of the local
area.

Volunteering opportunities take place every other Saturday from 11am to 3pm and
volunteers are contacted on a regular basis through a Mailchimp database (newsletter once
every 2 months containing a calendar of events); through the Gullion Facebook page and
new volunteers are encouraged to come along via the Facebook page, the Partnership
website; newsletters, word of mouth within the local communities and through Volunteer
Now.

Every July, 10 new Youth Rangers (14-17-year olds) are recruited and trained during a two week period. This is a competitive recruitment process where young people are requested
to complete an application form to gain a place. The young people must come from the Ring
of Gullion area. They undertake a mixture of practical conservation and educational
activities, combined with lots of fun. They learn new skills enabling them to safely spend
time outdoors exploring and giving something back to the area, for example, map reading
and orientation; first aid and essential life-saving skills; canoeing; bush craft; bracken
bashing and litter lifts; tree nursery maintenance and path building; culminating in a trip to
the Mournes so that the young people can compare that landscape to their own in the Ring
of Gullion. 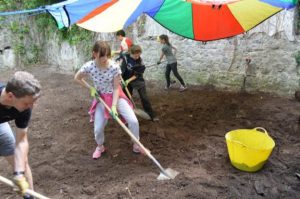 The young people also receive an Explorer-level John Muir Award and Millennium Volunteers recognition (50-hour Award). The recruitment process and the availability of additional recognition made a difference to the calibre and interest of the young people on the programme. Last year the Partnership brought back four previous Youth Rangers as Junior Leaders, which worked really well as they undertook the role of peer support, including pastoral care. They developed a photo journal of the two-week experience which has been an amazing resource and evidence base for the skills gained and journey undertaken by the young people. 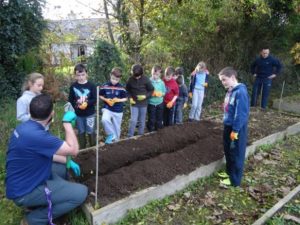 Various local primary schools have been involved with various aspects of the Landscape Partnership. St. Mary’s PS, Mullaghbane have been involved in the tree nursery, learning all the processes involved, from finding the seeds, planting and looking after them as they begin to grow. This work supported the school in gaining their Eco Schools Award and has encouraged them to develop their own grounds. Dromintee PS worked alongside adult volunteers to revamp a wildlife area in their school grounds and plant some trees. Other primary schools have provided homes for trees and assisted the Partnership with increasing the tree cover in the Ring of Gullion. A local community (Glassdrummond) came together to do an initial litter lift of a wooded area and then became more enthusiastic about their local area. As a result of the community enthusiasm a local community association was established, and the group have taken ownership of their local area; planting trees and developing events and programmes within the local woods that they have managed over time. 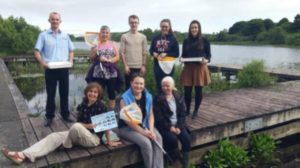 Approximately 50 volunteers have been trained as ambassadors for the area. They undertook fairly rigorous training which included walking tour guide training, first aid and learning about the local geology, biodiversity and culture of the local area. Some of these volunteers are B&B owners, business owners and local entrepreneurs; all are passionate about their local community with a desire to pass it on. These ambassadors have been able to inform visitors and guests, guide walks and undertake administration roles. From the opportunities provided, some Ambassadors have created their own businesses delivering walking, foraging and mindfulness tours. The majority of the Ambassador volunteers are from mid-20’s to those who are either running their own business or retired.

These volunteers play a crucial role in the many events that are organised throughout the
year in the Ring of Gullion area. The majority of the events are concentrated in the Lúnasa
Festival; a month-long festival held during August, with a wide range of events that brings
the area alive. In 2018, volunteers were vital in the running of two larger events, Cultured
Celts in Bessbrook and Geotastic Extravaganza which included living dinosaurs, educational
geological activities and much more. Some of the Ambassadors contribute by organising
their own activities and events, using an Event Toolkit, which has been developed over the
years, to support them.

Generally, the events volunteers aren’t trained; however, they play a vital role in welcoming
visitors to the events, helping with set-up and take-down, registration and administration
roles including event promotion and, the proof reading and distribution of information. 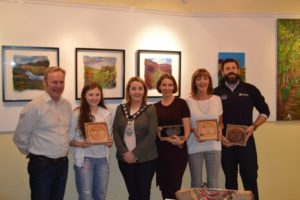 Word of mouth is the key to community and voluntary involvement in the Ring of Gullion
Landscape Partnership and its success to date has been in part due to the dedication and
commitment of local volunteers who have given thousands of hours over the last four years
to the initiatives and programmes developed and supported.